Develop your design methodology. A movie 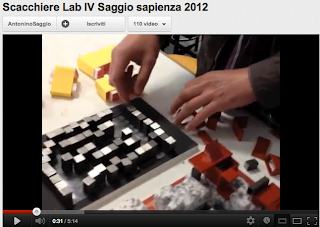 Each student select an architectural design work in the proximity of their own design problem. The choice is done within the book "Architettura e Modernità" (Carocci 2010). This is done to be sure that students:
A. Do pick a Christ and not an Evangelist (i.e. the original of a certain school of design thought and not a follower). B. They can - while reading my  book -  study and understand the entire cultural /design context within which the picked architect moves.

After having done this.
Each student - they are 60 in my studio -  build what we call in our jargon "a scacchiera" (a chess board). It means a movable design systems of components that can be used
a: to recreate the architect original work
b: to recreate whatever design variations of the original principles (order in kahnian terms)
c. To create their own chess board ! developing their own methods in order to address their own problem

In the movie is shown.
Louis Sauer's Penn's Landing and amazing new chess board to attack an existing building block with bottom up fill in strategies
Peter Cook's Cultural hall in Grasz, an amazing functional structural understanding that depicts the architecture not as stupid blog but as a series of interlocking spheres!
Zaha Hadid's Fire station, to show that a chess board does not mean a mechanic assembly of pieces on a board but and interweaving  play between land and forms architecture as a landspacep or a landscape as architecture

The exercise IV comes after three previous ones on i. picking their site, ii. write their program, and iii. the study of climatic conditions and it is aniticpitated but several lectures on the emotional and technical challenges of design actions. Other three design exercise have to follow before final exam and design production.

Each exercise is always based on "Concept Test" methodology, always directly applied to the design on development of each student  as explained in an article of many years ago, that recalls my experience in 1984 as a young teacher with professor Louis Sauer.

Pubblicato da Antonino Saggio a 8:31 am

Excellent post. I want to thank you for this informative read, I really appreciate sharing this great post. Keep up your work.