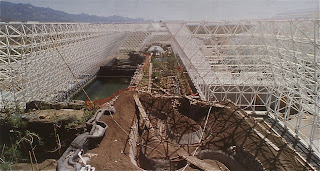 Biosphere 2 is a 3.14-acre (12,700 m2)[1] structure originally built to be an artificial, materially-closed ecological system in Oracle, Arizona (USA) by Space Biosphere Ventures, a joint venture whose principal officers were John P. Allen, inventor and Executive Director, and Margret Augustine, CEO. Constructed between 1987 and 1991, it was used to explore the complex web of interactions within life systems in a structure that included five areas based on natural biomes and an agricultural area and human living/working space to study the interactions between humans, farming and technology with the rest of nature.[2] It also explored the possible use of closed biospheres in space colonization, and allowed the study and manipulation of a biosphere without harming Earth's. The name comes from Earth's biosphere, Biosphere 1. Earth's life system is the only biosphere currently known. Funding for the project came primarily from the joint venture's financial partner, Ed Bass' Decisions Investment, and cost $200 million from 1985 to 2007, including land, support research greenhouses, test module and staff facilities.
From: http://en.wikipedia.org/wiki/Biosphere_2
The term “synergy” has often been abused for some time now -  everything has become synergic.
And quite rightly, though not entirely, the purists say: “Enough of this synergy, of this synergic, of this-oh no!- synergically.”
If you don't like the term synergy, you could call it “biological mathematics”  but the concept remains and has to be understood once and for all because it is the key to many “elevated” human activities. So this biological mathematics (the neologism isn’t bad) says that 1+1 isn’t 2 at all, as in algebra. It can be zero, or -1 or it can be 3 or 4 or 5!
Among other things we should have learned at school is that if you take one of Newton’s apples and then take another one from the same supreme British physicist’s tree, you get two apples.
But, if you take two hydrogen molecules and one oxygen molecule, then voilà, you’ve got water and, as a consequence, many other things present in our biosphere!
What does this mean? It means that the sum of elements in this biological mathematics creates multiple effects which can have, in some fortunate cases, exponential results.
I have looked for a shining example of this approach and there could be none better than that of the inventor of Biosphere2, John Allen (whom I consider both a very dear friend and mentor). Allen is a likely candidate because by 1971 he was already calling his ranch in Santa Fe, New Mexico,  Synergia Ranch.
It was his vision of life and also a homage to the chapter “Synergy” dedicated to the subject by R. Buckminster Fuller in his coeval volume Operating Manual for Spaceship Earth.
Bucky Fuller is a nineteenth century inventor and thinker in the best sense of the term! He is one of the great American transcendentalists (like Emerson, Whitman and Frank Lloyd Wright).

Richard BR. Buckminster “Bucky” Fuller (July 12, 1895 – July 1, 1983)[1] was an American engineer, systems theorist, author, designer, inventor, and futurist.
Fuller published more than 30 books, inventing and popularizing terms such as "Spaceship Earth", ephemeralization, and synergetics. He also developed numerous inventions, mainly architectural designs, the best known of which is the geodesic dome. Carbon molecules known as fullerenes were later named by scientists for their resemblance to geodesic spheres.
From: http://en.wikipedia.org/wiki/Richard_Buckminster_Fuller
John Allen put together the operative, profound, revolutionary, non-conformist,  holistic thought of Bucky and his own geodetic technique with a philosophy stemming from a far away and, in fact, politically opposed culture during the era of the USA-USSR cold war. This meld concerned the studies of Vladimir Vernadsky, a Russian scientist who achieved cosmic reasoning and who saw geological, biological, atmospheric and human phenomena as an interacting whole of forces and forms.
He did not do this in a short essay, but in a series of important edited writings as president of the Science Academy of Ukraine.

Vladimir Ivanovich Vernadsky (Russian: Влади́мир Ива́нович Верна́дский, Ukrainian: Володимир Іванович Вернадський; 12 March [O.S. 28 February] 1863 – 6 January 1945) was a Russian/Ukrainian and Soviet mineralogist and geochemist who is considered one of the founders of geochemistry, biogeochemistry, and of radiogeology.[1] His ideas of noosphere were an important contribution to Russian cosmism. He also worked in Ukraine where he founded the National Academy of Science of Ukraine. He is most noted for his 1926 book The Biosphere in which he inadvertently worked to popularize Eduard Suess’ 1885 term biosphere, by hypothesizing that life is the geological force that shapes the earth. In 1943 he was awarded the Stalin Prize.
From: http://en.wikipedia.org/wiki/Vladimir_Vernadsky
John Allen invented the incredible equation Vernadsky+Fuller and this invention was the basis of his prodigious project: Biosphere 2.
At the core of this project (the subject of which public discussions were held with its inventor twice recently in Rome) there was the ingenious intuition that the idea of the biosphere as promulgated by Vernadsky could be combined with the ecological observation and technical inventions of Fuller.
Biosphere2 was thus built in 1991 at Oracle in the desert near Tucson, Arizona, and still affirms itself as an extraordinary work of both engineering and ecological science, one of the most important of its kind. Allen, assisted by a team of numerous consultants, of whom the architects Margaret Augustine, Phil Hawes and the engineer William Dempster should especially be remembered, so realised a project according to the image and likeness of the terrestrial biosphere that an interacting whole of geological, ecological and human forces formed of seven biomes (ecologically balanced systems) could serve to study systematic phenomenon.
Biosphere2 was based on these dynamically balanced systems where carefully studied percentages of plants, microbes, water, animals and air were in a cycle of continuous regeneration. Through complex research with several experts specialising in different areas, the seven biomes were thus determined (from the Amazon forest to the Great Coral Reef, from the anthropologic Mediterranean environment to the same ocean’s marine environment) all housed within great glass panelled surfaces which covered an area of more than a hectare. Living and relaxation areas and laboratories were also integrated into the structure.
The experiment allowed, among other things, the patenting of various systems and technologies that brought up to 100% the recycling of water, human and animal waste as well as the autonomous generation of food and a minimum loss of air inside the great closed environment.
Eight scientists, including Mark Nelson and Ray Walford, lived sealed up in this environment for two years, experimenting with its efficiency.
After this period, Biosphere2 was conceded to Columbia University and then to the University of Arizona which modified its structure. Nonetheless, this extraordinary event marked the basis of a possible systematic development of architecture, an architecture that need not necessarily be connected to infrastructural networks but is autonomous with regard to its own vital and energetic cycle.
An important source of study on this question is described in Allen’s new book, Me and the Biospheres. A Memoir by the Inventor of Biosphere2 (Synergetic Press, Santa Fe, 2009), which provides the opportunity to follow in detail the history and conquests of this and other of Allen's projects.  There are few architects and engineers, I’m sure, who know what I’m talking about, but thanks to the Web and Wikipedia in particular, in-depth information is available to all. Lastly: this article was written on returning from a research period with the computer scientist Sergio Crochik and Allen himself.
The idea of the Vernadsky and Fuller “synergic” combination was born out of a discussion with Sergio himself and most certainly, without all those hours of work spent together it would never have got so far.
John Polk Allen (born 6 May 1929, Carnegie, Oklahoma)[1] is a systems ecologist and engineer, metallurgist, adventurer and writer.[2] He is best known as the inventor and Director of Research of Biosphere 2, the world's largest laboratory of global ecology, and was the founder of Synergia Ranch. Allen is a proponent of the science of biospherics.
Allen currently serves as Chairman of Global Ecotechnics, and a director of Biospheric Design and of Institute of Ecotechnics. He is Fellow of the Royal Geographical Society, the Linnean Society, and the Explorers Club.
In the early sixties, John Allen worked on regional development projects with David Lillienthal’s Development Resources Corporation in the U.S., Iran, and Ivory Coast where he became an expert in complex regional development. Before that he headed a special metals team at Allegheny-Ludium Steel Corporation which developed over thirty alloys to product status. He has led expeditions studying ecology, particularly the ecology of early civilizations: Nigeria, Iraq, Iran, Afghanistan, Uzbekistan, Tibet, Turkey, India, and the Altiplano.
He studied anthropology and history at Northwestern, Stanford, and Oklahoma Universities, and served in the U.S. Army’s Engineering Corps as a machinist. He graduated from Colorado School of Mines and received an MBA with High Distinction from the Harvard Business School. In the early 1960s, Allen headed a special metals team at Allegheny-Ludlum Steel Corporation which developed over thirty alloys to product status, then he worked with David Lillienthal’s Development Resources Corporation in the U.S., Iran, and Ivory Coast.
Under the pen name, Johnny Dolphin, he has chronicled his personal history alongside the social history of his many destinations in novels, poetry, short stories and plays.[3
http://en.wikipedia.org/wiki/John_P._Allen 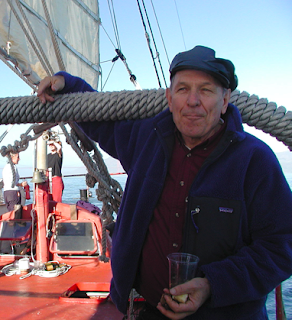 Pubblicato da Antonino Saggio a 10:39 am

Anonymous said...
This comment has been removed by a blog administrator.
5:57 pm